So yesterday afternoon, John and I finished the 2012 Cape Epic. Our final stage was 63km into our final finishing point at Lorensford, and after a pretty crazy week, our last day wasn't devoid of it's own drama. We had a late start, although it appears our 5am bagpipe guy didn't get the memo and still tried to wake us all up at 5am (annoying... at least itmade me get up and go to the toilet so I didn't have to queue!). Lined up on the start line ready for our last stage just before 8.30am, we were treated to a spectacular flight aerobatics display (very cool) and then we were off. 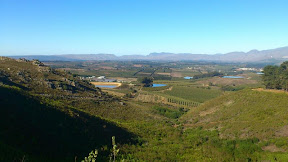 My legs felt better than the day before, but still not amazing... Enough to get me through one more day! John did some towing at the start to help me up a couple of early hills and towards the end would run next to me helping push me up the steeper climbs. Our first climb of the day was a gentle reminder from Dr Evil (the course setter) that we weren't quite finished yet. The day was spent rolling through lovely singletrack and "wine farms" (that's what they call vineyards here). As we rode along, there was a huge amount of support along the side of the trail. I remember distinctly riding past one guy who yelled out "well done. You shoould be very proud of yourselves". It was such a lovely thing for a stranger to say and I must admit it made me choke up just a bit. It was a beautiful day and the hot spot climb for the day was a lovely, slightly technical climb up to a saddle in a world heritage area. The trail that went down the other side was a compulsory portage down this lovely bedrock trail which would have been much better enjoyed riding our bikes down it, and, ironically, probably would have caused less damage to the trail than us clunking down it in our metal-studded mountain bike shoes (it's always interesting the perception some groups have of the sort of damage mountain bikes do to trails). The view was amazing though, right across the mountains to the coast. 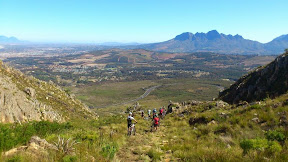 Just after the portage, we had some more singletrack which opened out onto a fairly smooth, fast fire trail descent. This was where our first challenge for the day arose. I bombed down this road at some ludicrous speed, blissfully unaware of the two huge holes that had rutted their way across the road during the rain earlier in the week. I was following John's line, but being a heavier dude, he was a little less likely to get stuck in one of the holes. I didn't see the first one until I was right on top of it. It was about a foot wide and just as deep and at the speed I was going, bunny-hopping it wasn't a problem. The problem was that probably about a metre or two later, there was another similar hole, and my bunny-hop basically landed my front wheel right in it, catapaulting me over the bars at speed. It all happened so quickly and must have looked spectacular from behind. I remember lying on the side of the trail yelling out the "F" word numerous times in agony at the top of my lungs. I was sure I had done some damage. Other riders had seen the crash and stopped and John turned around and came back. It hurt, but everything on me and the bike (amazingly) still seemed moving and functional. I got up and went to get back on my bike to be confronted by one of the marshalls, who tried to stop me riding before he had checked me out. I pushed past him and got back on the bike. I was pretty angry about it... The whole race, the course markers had put triple-arrow "caution signs" on some of the most mundane and tame terrain, but there was no marking whatsoever on this one, on a fast, flat descent, with the potential for some very serious accidents. I felt angry about it for the next half hour or so. Apparently, after we had moved on, another guy crashed in the same spot and broke his arm. I still can't believe I rode away from both accidents... Think I have run out of "get out of jail free" cards now! 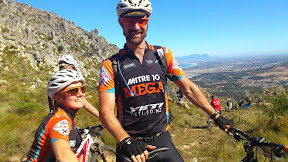 That was about half way through the stage and a was very very cautious after that. It was a really brutal reminder that we hadn't finished the race yet and shouldn't assume that we were going to until we were safely across the finish line. We continued on, probably at a pace that encouraged more self-preservation than before. About 15km out fro the finish, John's forks crapped themselves, forcing him to have to lock them out for the rocky trails and singletrack for the rest of the race. Having said that, other than that, the bikes have been amazing and haven't skipped a beat. They dealt with the terrain and harsh conditions really well, and I have been surprised at how well my bike withstood the two crashes I had... Definately a bloody good choice for the event! I was so stoked to see the 5km marker for the finish, and then even more stoked to see the 1km marker. When we finally crossed the finish line, we took our place in the queue to be presented with our finishers medals from Burry Stander, Christoph Sauser and the two Bulls riders, which was a nice touch. It's funny, but I had imagined that crossing the finish line, I would break down in tears, and although there were a few sniffles of joy as John and I hugged each other, it felt like a little bit of an anti-climax... It was probably a lot to do with how tired we were. My brain certainly didn't have much to say on the topic and my body was pretty battered and bruised. We were finally done! 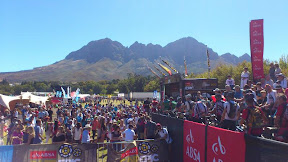 The atmosphere at the finish line was amazing. We picked up some finishers jerseys (with finisher spelled "finnisher"??? WTF? Terrible typo!) and then Gavin and Sarah whisked us away backed to Cape Town and before we knew it, we were sitting in a cafe gorging ourselves on whatever we felt like eating. It was nice to be back to some sort of civilisation. It was nice not to have to crawl into a tent and sleep on a thin matress in a sleeping bag that night. It was nice to use a real toilet and running water from a tap and not a truck. It was nice to just be able to sit there and stare blankly instead of having to prepare our bottles and bikes for the next day and force ourselves to eat when we didn't want to. This morning, I woke up feeling like I had been hit by a bus. I now have matching elbows, chewed up by South Africa, trails, my right thigh is completely bruised and swollen right down to my foot and in behind my knee is also bruised. My neck is also stiff from where my head hit the ground (ALWAYS wear a helmet!). It was difficult finding a comfortable position to sleep in last night! But the bruises and swelling and scabs will fade... The experience of this last eight days won't. People who have done every Cape Epic up until now swear this was the most difficult, and I would certainly believe it! Over the next week or so, I'll put together a bit of a wrap-up with highlights and low lights and feelings once I have the mental capacity to process it all! 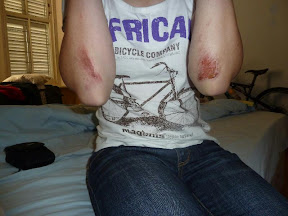 Final results we came 13th in the mixed category and 202nd overall in the entire field. Thanks to John for being a weapon teammate. And thanks to everyone who showed their support over the last 8 days. Your words of encourangement have really helped me through and I've looked forward to reading your comments each night after each stage. For now, there will be some rest and recovery and healing time, then I will start preparing for 24 hour solo world champs in a month and a bit in Italy!
Posted by Megan Dimozantos at 8:51 PM 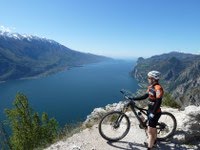